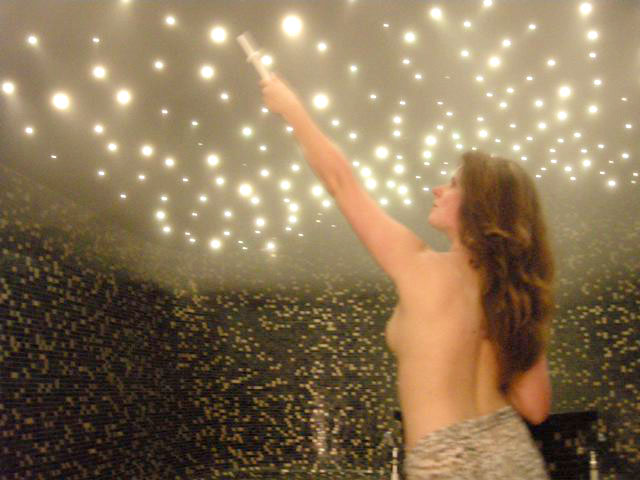 In Greek Mythology Eros is the god of love, known by the Romans under the name of Amor. Eros was the son of the goddess of beauty and love, Aphrodite, and Ares, the Greek god of war; thus, bow and arrow were in his blood from the outset.

The person who reacts to the erotic stimulus is immediately confronted with the question of how to deal with it: should it be accepted and experienced or should it be suppressed? The decision has to do with the control over one’s own body as well as the control exercised by other people such as one’s partner or society. In history, the control a woman had over her body was increasingly dominated by the question of sexual abstinence, whereas the control a man exercises over his body is manifold. Man in general embodies control or power – not every man, but most men still more than most women. Whether it is in sport, fighting, hunting or intellectual exercise, many men exert control and power over others and/or over their bodies daily.

In a matriarchy the woman is highly valued as the source of fertility and life. The family is centred around the mother. Only after private ownership began to be differentiated from communal ownership and other people’s property became desirable – i.e. as systematic livestock herding became more widespread as it did relatively early in the middle east – did the question of paternity of a child become relevant due to the question of inheritance. One’s possessions should be passed onto one’s own child, and property, as far as livestock and land was concerned, was passed onto male descendents. Just as nature became subordinated to private ownership, i.e. livestock and grazing land, the same applies to the body, to begin with the woman’s body. A man needed to ensure that a woman only bore his own children.

Our body is for ourselves the most personal primordial nature that we know – the body is pure nature. If our relationship to our body changes, then so does our relationship to nature. The moment that woman, and with her her body, became subject to ownership, she became an object. In man’s expanding control over nature, the woman became as much an object as the earth, trees, mountains and animals. With her, others became increasingly forced to carry out unpleasant tasks. Slavery and serfdom became commonplace and with it war.

When we think of the expulsion from paradise as described in The Bible we remember the Tree of Knowledge. Knowledge makes people equal to God and God punished the people for this: Man should toil by the sweat of his brow; Woman should bear children under pain. When the white settlers in North America saw the women of the indigenous people happily working in the field, it appeared so unbearable to them that the only solution for them was to extinguish that culture.

The expulsion from paradise is not only about the realisation, understanding and knowledge that man gained and the more equal relationship to God, but the expulsion from paradise also changed man’s relationship to nature. Whereas in paradise harmony with nature enabled the healing powers of nature to be harnessed, the process of exploitation of nature transformed naturopathy to a science. And science is power. Women and shamans were not part of this science and, fearing competition, thousands of years of knowledge were banned and burnt.

Democracy, the enforcement of majority rule over domination by a minority, put an end to arbitrary exploitation. The process of democratisation in the world is not yet complete and there are many forces unwilling to submit their privileges without resistance. The democratic rule of law established a system in which it is possible to live in peace with one another and this provides a better chance for common sense to prevail over egotistical forces. Democracy offered and still offers women an equal chance to take part in society. However, only the birth control pill and legal abortion first brought women full liberation. A woman can direct her own life – she can decide if, when and with whom she wants to have children. Democracy offers women respect. It helps provide them with statutory protection against violence. She may earn her own upkeep and that of her children and is therefore freed from dependency upon others. She changes from object to subject, from dependency to active participation.

As more women began to actively take part in working life, woman enters into competition with man. She cannot expect to be welcomed with open arms. After all she lays claim to privileges which for thousands of years have been male privileges and have become part of their nature. Woman does not yet exercise equal rights in all areas of decision-making and influence, whether in committees, the media, politics or instruments of the state. The gradually increasing influence of women in a democracy can be supported by solidarity between women and between those men who do not feel threatened by the increased participation of women in society.

Private ownership formed the basis upon which exploitation of nature became a principle. Connected with this and in parallel stereotypes began to form: what do we associate with a woman when we see or hear her? What do we associate with a man? These are subconscious processes informed by an age of tradition. When we allow stereotypes to direct our behaviour we do not react to the actual person but to an idea of them as given by a stereotype. Stereotypes dominate our perception. With the increased participation of women in the male domain, these stereotypes no longer fully apply and become a burden and an obstacle. This can be grasped as a chance for everyone.

If we are able to better respect reality, we can better respect nature. An increased interest in all aspects of reality enables women to contribute their knowledge of reality, to introduce their experiences, to add their knowledge. A holistic approach can increasingly replace exploitation, not just out of necessity but also because a majority may come to believe in it. And what is particularly motivating is the fact that every single one of us is able to make a contribution in this process. Everyone is important.